The Ghosts of Halloweens Past 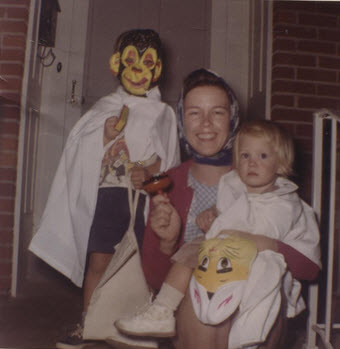 Yesterday was Halloween, and I had a great time looking at pics of people’s costumes on Facebook, though I didn’t dress up or go out myself. Halloween has never been a big part of my life–especially once I became a diabetic, the candy-laden aspects of it were hard to justify. I mostly didn’t want to be near it.

But Halloween is definitely one of those holidays that celebrates both the joys and sorrows of life. All by itself it provides a powerful commentary on the ways in which pleasure and pain link up.

I don’t remember too much about Halloweens. We have family pictures of my mom getting ready to take my brother and me out for what must have been my first trick or treating experience–I was a blonde toddler who hated the cute bunny mask and so wore it mainly around my neck on its elastic string. I don’t have any memory of my own of that evening, just the pictures.

But I do remember another year when I was about nine. That was before children past toddlers were supervised. Instead, we ran wild through the neighborhood, kids of all ages. Those were the days when a question remained in “Trick or treat?” Children had options for people who provided no treats, and they had options for each other. My memory is indistinct, but emotionally clear: I was terrified. I remember at one point traversing an area rampant with kids, most of whom were running full tilt and shrieking, as well as in costume. I remember not being sure who any of these kids were, even though I probably went to school with most of them. I stood still while chaos reigned around me. Then, a tall teenage boy in a vampire costume swooped out the darkness and walloped me, nearly knocking me over with the weight and force of his weapon. It was a long tube sock filled with flour and tied at the neck, I would later learn. When it hit me, I had no idea, just felt the wind leave my lungs and saw a puff of white powder evanesce, leaving a shadow across my chest. As I gasped for air, the boy made another pass by and bludgeoned me across the back. At that, I snapped back into motion of my own and ran toward a gaggle of kids my own age, maybe my friends. When I arrived in their midst, I was laughing, not understanding why, but laughing. The other kids took me in, one or two hugged me briefly, and off we went, laughing and squealing, safe together from the dangers of the night.

Years later, in my twenties, I attended a Halloween party held at the studio of a well known photographer in my town. For once in my life, I was at the coolest place to be in town, even if that town was only Knoxville, Tennessee. It was a great party, with a regionally famous band playing, an open bar, fabulous food, and extremely neat, all handmade costumes. I mean, people planned (and sewed) for this party, an annual tradition, for months ahead of time. One couple dressed up like a chef with a lobster pot and a lobster. One woman came as a peacock, complete with a tail made of real peacock feathers that she could open in a upward sweep that cleared half a room. My boyfriend and I went as Night and Day. For me, the coolest part was that, though I wore no mask at all, a golden wig and blue glitter face paint completely obscured my identity. No one knew who I was at all, and the pleasure of this fact stunned me. I said a few outrageous things.

A few years later, I reprised this phenomenon at a Halloween party put on by one of my MFA professors at the old four-story mill that he had turned into his home. I wore a Cruella DeVil wig (though Cruella is one of my all-time favorite characters in literature, I went as a zombie rather than Cruella) and painted my face completely, and no one knew who I was. Men, I had come to understand, really liked not knowing who a woman was. Never in my life had I been flirted with more.

I do also remember one earlier Halloween, when I was around age eleven or twelve, maybe thirteen, when my friend Karen N. and I dressed up as two parts of a horse. I was the horse’s ass, of course. We made the entire costume out of construction paper and tape, if I recall. Recently, I wrote a short story about Karen, a fictionalized version of what I came to believe was abuse going on in her home. Maybe that is why I have these memories of Halloween on my mind. I lost touch with Karen decades ago and have not given her much thought since, but suddenly last month a few memories of her came back to me, filled with pleasure about the brief girlhood friendship I had with her and with fear about the vague suspicions I had then but didn’t know how to articulate or do anything about.

Then yesterday an old boyfriend got in touch via email. Probably it had been eight years or more since we’d been in touch (and twenty since we were “involved”). No romance remains between us, just a (mostly theoretical) dedication to wishing each other well and valuing the acutely mixed time we spent together so many years ago. Yes, there were some very bad and painful times, but there were some peak times as well. I mostly dwell on the latter, but perhaps what makes them stand out so much is the contrast between them and the extreme pain we caused each other. Yes, I ran from that and other painful relationships, like I ran from the brutal flour-filled sock that Halloween forty years ago, and I arrived here, where I am today, laughing. Not knowing exactly why or how, but laughing, joyous to be alive and embraced by those who give me shelter of all kinds.

P.S. First blog post in nearly a year, I know. The textbook is done, though it remains overly optimistic for me to think I might get back to Joyous Crybaby regularly. Still, the theme still moves me.