A Year in the Blogosphere 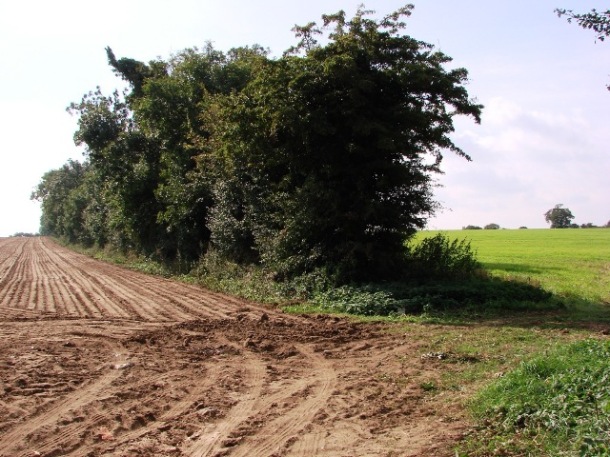 Joyous Crybaby has readied me to keep my eyes on that horizon while I plow that soil. (Photo by Lisa Wild for the Geograph Project [http://www.geograph.org.uk/].)

Actually, it’s more like 13 months in the blogosphere now, and I’ve been thinking since I passed the one-year anniversary that I should post another reflection on this endeavor. Thinking about it at the six-month mark helped me further define my purposes and bask in an admittedly self-satisfied glow that I had kept it up that long.

In the next few months, I’ll be facing new challenges as a blogger—the end of sabbatical, a return to full-time teaching, and deadlines for a major book project. I remain uncertain of the continuing viability of Joyous Crybaby, even though the reasons are shifting and even though I feel all the more devoted to her. I still feel as though she’s doing me good.

She’s not a work project, though, and I am employed in a demanding field where I’m not supposed to spend much time doing anything but what will further my career. Academia more and more is judged by business models, and this involves an increasing obsession with quantifiable results and quantifiable justifications. Every year, we are required to turn in the dreaded document called a Faculty Annual Report, and each department chair is required to turn in the larger version that supposedly proves quality and intellectual achievement by the number of grant dollars, publications, and “seats in butts” (or student credit hours) that we have produced, collectively and individually. Our departmental budgets and our individual merit raises are determined by such numbers (not that the raises offset the pay cuts we are experiencing via means such as lower retirement contributions). Whether institutions with such a myriad of purposes and such a myriad of considerations is best served by this constant quantification is debatable, of course, but it’s a fact of almost any academic’s life these days. Here’s one great write-up of a blogging academic who kept track of his work time.

Therefore, every week, day, half-day, or hour I spend writing a blog post—and finding supporting resources, references, and appropriate copyright-free illustrations, and then formatting and linking everything on the blog itself—I wonder what the heck I am doing spending so much time on it.

I’ve also had occasion to wonder why I didn’t at least focus my blog on creative writing—my area of professional expertise. There are many academics who do gain some credit for their profession-related blogs and who at least spread the word that they are experts in their fields by narrowly focusing on a professional sensibility in a more or less narrow field. In other words, though they may practice a more general-reader style, their blog personas directly reflect their professorial research. Mostly they are not very personal. There are indeed many such blogs in the world of creative writing—almost all literary magazines these days have a large web presence, many literary magazines are fully online and function as community blogs with selection requirements, and there are dozens if not hundreds of blogs about the writing life, craft, “how I became a writer,” publishing tips and advice at both magazine and book level, finding an agent, various genres and styles of writing, and so on. Some of these blogs and online literary venues are fabulous, and I read a lot of them avidly if not regularly.

Maybe the sheer plethora of existing creative writing blogs made me choose instead a wider focus and one rooted in issues in another field entirely (my starting point of my negative reaction to positive psychology bromides). However, as the year has passed, I’ve had to justify this choice to myself.

There are many reasons I’ve thought about, but perhaps the most important is that I wanted to engage with the wider world.

Another characteristic of a life in academia is a great deal of specialization. You’re not just a chemical engineer, you are a chemical engineer specializing in air pollution modeling and incineration. You’re not just a professor of Italian, but you specialize in Italian travel and immigration literature with a focus on Giuseppe Antonio Borgese, Mario Soldali, and Emilio Cecchi. (Two real examples from the UCF website.)

I have already bucked this trend to a certain degree by working across the creative writing v. scholarly writing divide and by writing in not just one creative genre, but in fiction, nonfiction, and poetry. (And my undergraduate degree was in studio art.) This has had its downside, and it may be true that I am a master of none of these forms. So, I understand why my peers in academia often focus much more narrowly than I do in their work. It’s a habit that is rewarded in the system, and it suits some people just fine.

I believe, however, that writers do have a responsibility to respond to the world beyond the confines of narrow specialties. It’s a different point than the one that I criticized Marjorie Perloff for making about academia rendering writers’ work repetitive and mediocre, though it is related. (It’s also a point that I would apply to all those in academia, even more so to many scholars compared to many of the creative writers.)

This all leads me to another influence on my blog choices—that we live in a time when being a “professional” writer often seems to involve more time tending to the business of writing than to writing itself. At six months, I mentioned how I felt a need to get back to my own roots as a writer exploring the world rather than as a writer being an expert. I needed to find my way back to “beginner’s mind,” as the Zen Buddhists call it. As Zen master Shunryu Suzuki is often quoted as saying, “In the beginner’s mind there are many possibilities, but in the expert’s there are few.”

And I do have to admit some boredom with a lot of creative writing blogs. It’s not because the content isn’t often useful, even insightful. What in a professional sense is no doubt seen as “focus” or “coherence,” however, frequently becomes too self-reflexive and insular for my taste. Even though some creative writing blogs go beyond the purpose of promoting a given writer’s publications, reviews, and lectures to include discussion of issues in the field, they all seem to me cut off from the rest of the world. These blogs remind me of the kind of creative writing workshops where a focus on “craft” does not include any concern with intelligence, personality, or soul (admittedly difficult things to “teach” and touchy to even discuss). Even though I have a passionate interest in many of the issues they raise, I need to embrace a wider horizon.

Is that a strong enough statement to be considered a manifesto? I’m not sure, but I mean it as one. Graduate school for me opened new universes, but over the past few years in the academic grind, I have been engaged in a battle for my own soul and self—to keep from becoming what I consider too narrowed by academia. For a long time, I was losing that battle, shriveling, becoming bitter, obsessing daily about fundamentally trivial things, wearying of it all. Though I had gained tenure and a wonderful husband, I had lost involvement in politics, gardening, cooking, animal rescue, friendships, family relationships, the great outdoors, exercise, and my own health.

Joyous Crybaby has been part of a multi-faceted process that I hope will help me face the next academic year and my return to the classroom with a sense that maybe I can keep my eyes up even as I labor with my fingers in the dirt of the academic field. As an alter ego, she provides me with a reminder that I need: that no profession—and no other person—defines me. All too often, we forget even ourselves beyond the surface judgments, caught up as we are in what others think of us. JC has been a great lesson in character beyond stereotype. It seems to me that this sense of mystery about what comprises human beings is vital to the writing endeavor, not to mention the endeavor of being a decent human being.