Maybe “hubris” is too strong a word. But the recent tragic and avoidable death of a former colleague has made me think about how we see ourselves as creative people. There’s a lot of baggage that comes with being a musician or an artist or a writer, at least in the popular image. It’s baggage that drags many people down. While I love Janis Joplin’s music, I don’t love that she died of a heroin overdose at the age of 27.

My former colleague died in a single-car accident when she lost control on a freeway. Her car was a convertible with the top down, and she was not wearing a seatbelt. She was thrown from the car when it hit a guard rail. Just a few days earlier, I’d had a conversation with a woman who’d had an eerily similar accident, but who’d been wearing a seatbelt and survived without injury. Neither car had flipped. 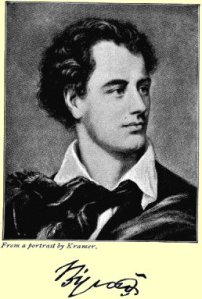 Last year I taught a course for Creative Writing students called Mad, Bad, and Dangerous: Images and Roles of Writers in Society. One of my purposes in teaching the course was to try to address the enormous mythology that surrounds artists of all types. Based on the prototype of Lord Byron–and the wit of Lady Catherine, who called him “mad, bad, and dangerous to know”—we tend to believe that writers and other artists have to be at least a little bit crazy and all the better to be bat-shit crazy. Crazy = creative in this formula. The idea goes back to the Greeks.

What surprised me was how completely unwilling many of my students were to even contemplate that this might not have to be true. I plied them with studies that demonstrate that the connection between creativity and mental illness is minor at most, and that many other factors are far more important in terms of what creates a writer (such as reading a lot). I asked them to read essays by famous, mentally well-adjusted authors. We read about how “blandness” is an aesthetic value in Chinese culture and how the role of artists in that society is different than in ours. They didn’t care. I knew the myth was powerful, but I hadn’t realized that even information and alternative models wouldn’t quell it.

So many of us have an image of ourselves as rebels and daredevils. And there is a kind of truth in it in that we need to be willing to take certain kinds of risks, at least intellectually and financially.

It is also necessary for writers and artists to have a healthy dollop of ego in our personalities. Without it, we would never have the nerve to go for it, to assert that we have something important enough to say for others to listen, and for us to survive the constant rejection and criticism that is always a part of a writer’s life. Frequently, that ego becomes defensive and overwrought in the face of so many fears and difficulties. And because another of our cultural myths is that artistic production is the result of genius, writers frequently begin to find it necessary to believe in their own invincibility, superiority, and exceptional nature. To put it crudely–and I just can’t think of a more apt term–it’s a mind-fuck.

What this too often leads to is a kind of bravado that involves drinking too much, taking drugs, acting irresponsibly and selfishly in the context of friends and family and self, and all manner of other wild behaviors. These habits by no means belong strictly to the arts, but in the arts we justify them with phrases like, “Genius takes its toll” or “Artists are crazy,” followed by sighs and eye-rolls. Everyone else who acts like this is just a jerk with problems, but we’re supposed to live on the edge. We are de-legitimized if we don’t.

Maybe this seems like an odd complaint, considering that my blog is about increasing intensity of feelings and not being vanilla and fake. Part of what I feel, however, is that, based on living this exaggerated if not false image, many of us in the writing world are losing touch with the real intensity of what it means to be creative and artistic. I even sometimes find in my students—and others— more of a desire to “be a writer” with all that implies about celebrity and lifestyle than to actually perfect their writing. The writing world is reaching a point where we will soon have our own Paris Hiltons. That may be inevitable, but let’s remember that writers and artists and musicians are distributed along the personality spectrum. Yes, some of us have mental health issues, but we don’t need to celebrate that. And no doubt there is some value in having a wild streak. Even I claim one. But we don’t need to drive each other further into stereotypes that end up killing us.